Puddles or portals? Another world underfoot

We’ve had a couple of weeks of fairly relentless rain and wind here in Orkney. One day last week we had such a downpour that our track was awash with run-off from the neighbouring fields, shin-deep in places, and we spent lunchtime digging little sluices and trenches to let the water drain away. It was very satisfying to watch the muddy water fill the little drainage canals we’d scraped out and the puddles begin to empty.
But today it’s bright and sunny. It’s such a welcome change. The ground is still completely sodden, squelching and sliding underfoot. There are broad sheets of water standing in the rain-soaked fields all around us. In this low-angled winter light the sky flashes up out of the dark, muddy ground. When I drove past on my way to the Co-op earlier the stubble fields were briefly lit up by tall clouds sliding past as if through the ground itself, flaming out with sudden and unlikely radiance. Everywhere there are sparks of a high, far-off, celestial blue erupting out of the hoof-pocked turf, like portals to another world right here under the cropped winter grass and mud.

THE OTHER WORLD UNDER OUR FEET

In the mythologies of these Northern latitudes the journey to the other world is often reached downwards through water: puddles as portals. In Icelandic traditional stories the world of the elves or fairies is reached by jumping into ponds, rivers or the sea. Sometimes the way down is through a whirlpool. When Beowulf, having slain the monster Grendel also seeks to kill its mother he dives into a deep marsh to find her. Throughout the British Isles precious offerings of gold and other metals have been found where they were dropped into bogs and marshlands many generations ago. The Vikings buried their most honoured dead in boats or boat-shaped tombs, and the journey to ‘the other side’ where the dead reside is often thought of in terms of a crossing or voyage over water.

In the tales of the Saami a boy reaches the fairy world by sailing through a fog. There he sees fishing lines having down from the sky though a ceiling of cloud, from the humans fishing above, but from his fairy-world view the fish are in fact sheep grazing dry land. The underworld reached through water is sometimes seen as if it’s a reflection of our world as seen in water, with the sun moving in the opposite direction, and in some stories from Saami land and Nenets in Northwest Russia the Otherworlders walk with their feet against ours.

It’s as if this other world is a reflection in a still loch or puddle and might be reached by jumping in, down and through. Down through water, or down through a cleft in the Earth. 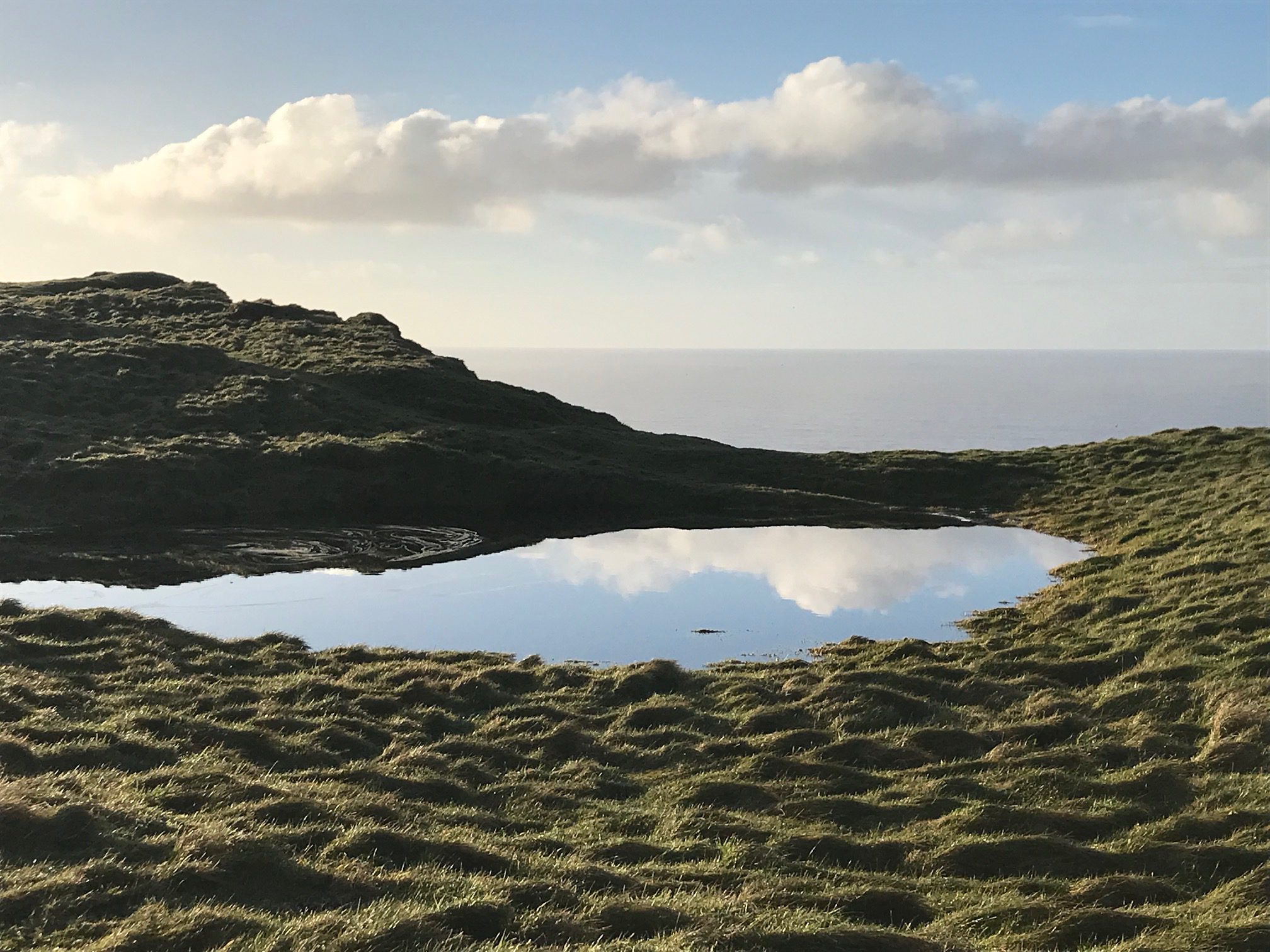 On a day like today it’s easy to imagine that there might be another world just beneath our own, one that’s reached through water but dry like ours when you get there, that’s maybe back-to-front and upside down like the world we see reflected, where the dead and unborn have their being, unreachable but always with us somehow, their feet touching ours as we walk. Their boats, perhaps, kissing the hulls of our own as we row. Reflections are in water as graves are in the ground, after all. Perhaps this is why winter, in many Northern cultures, is considered a time when this world and the ‘other’ world are closest.
I took a walk at lunchtime today. From a distance, the clouds were sliding through the big muddy puddles on the track, the blue between them seeming to open downwards into a deep, deep space. But whenever I reached it I found myself just staring into a few inches of muddy water. The door to the otherworld, it seems, slammed shut as I got close. It’s not so easy to pass through. 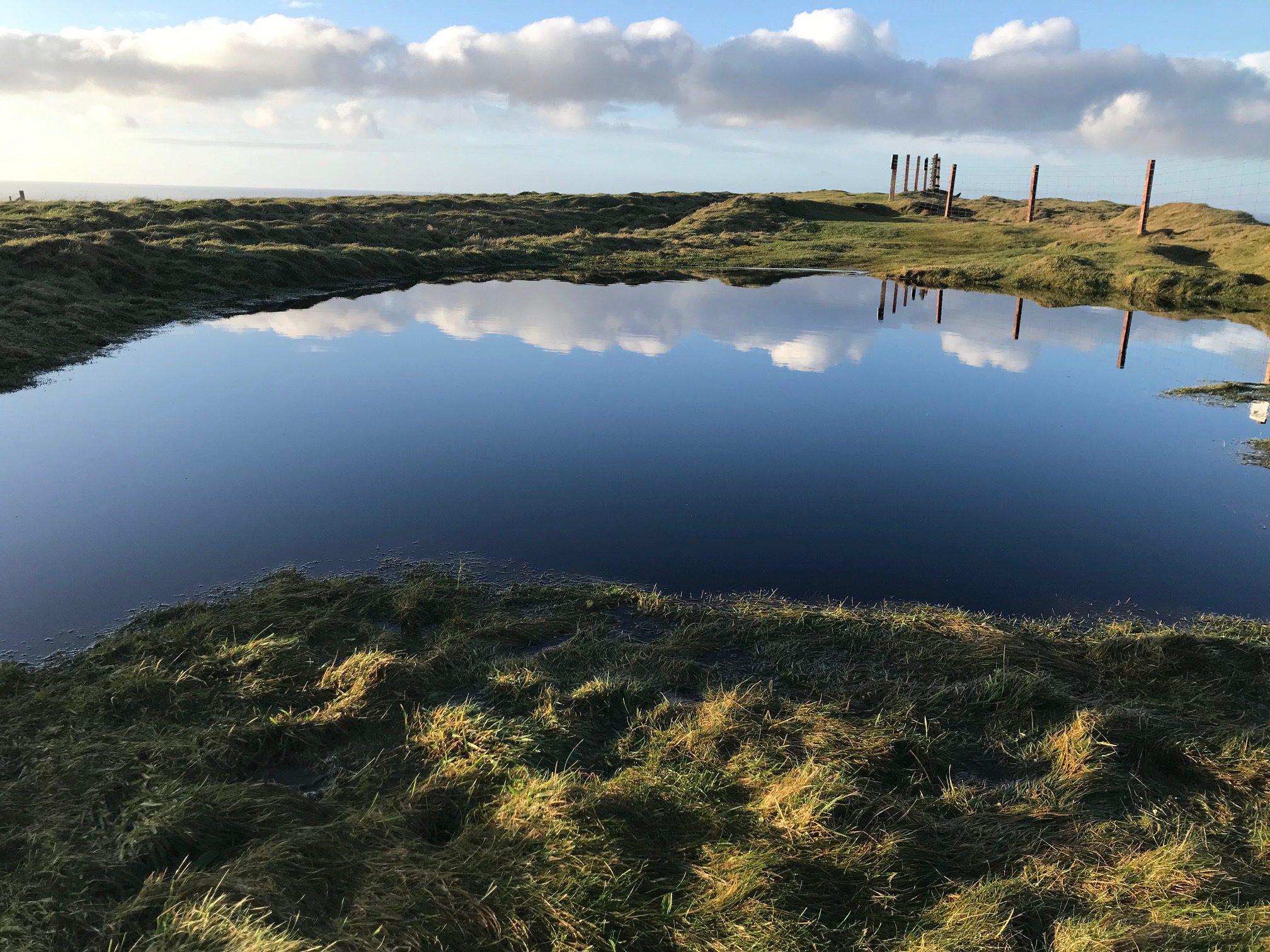 It’s a bit eerie, but suddenly vivid, this feeling that there’s another world just below the puddles or the thin surface of the grassy path, so close and yet unreachable.

Unless, like Beowulf, I dive right into the mud and come out on the other side.

You can see some of my recent drawings that have been inspired by Orkney’s waters here: