I’ve been listening to BBC Radio Three ‘Night Tracks’ a lot while drawing recently. Yesterday on the programme I heard the replay of a live performance from a recent all-night live concert. It was a piece I know well from a recording I have on CD, by the composer Gavin Bryars called “Jesus Blood”.

For 25 minutes a short loop plays on repeat, of an old homeless man’s voice singing the same refrain from a tune that might be a hymn, though nobody knows the source. There’s an almost unbearable poignancy in someone who is so clearly elderly, frail and so destitute he is sleeping rough, singing with such quiet certainty that “Jesus’ blood never failed me yet”.

The quavery voice cracks a little, and the old man’s breath whistles in his lungs, but he holds his pitch firmly and sings with heartfelt faith, even joy. It’s a haunting sound of resilience and hope against the odds. The singer’s identity may have been lost, but he is as vivid and stoic as a tramp in a Samuel Beckett play. 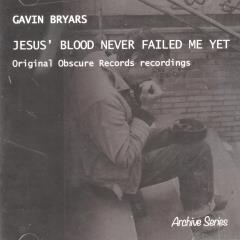 The piece begins very quietly, almost imperceptible at first, a single voice rising out of the ambient hiss of the field recording.

Softly, the orchestra comes in and little by little wraps the old man’s voice in quiet strings and gently lifts it up.

In my recording this eventually gives way to a brass band that pours over the whole thing like warm gravy, like the very sound of kindness, before receding to leave the old man’s voice trailing off into silence.

The piece has become part of the canon since its first performance in 1971. And rightly so, because within that seemingly endless repetition of a single phrase of music, we listeners are given a space to let whatever wordless, awkward yearning and hope take form within us and allow it to be held, just as it is, for a few minutes.

The same day a writer and maker I very much admire, Edmund de Waal, posted on his instagram about some work he made a few years ago that also involved repetition. ‘Porcelain Room’ is now in a private collection but it was first installed in 2001 in the Geoffrey Museum. It comprises 650 celadon glazed porcelain vessels arranged in neat rows.

It’s a beautiful, calm and contained piece of work. It must be a joy to live with, though I wouldn’t want the dusting of it. 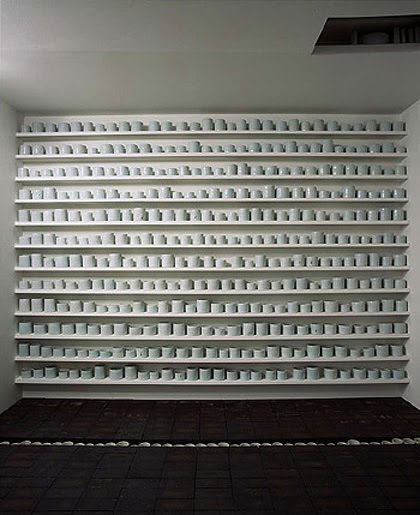 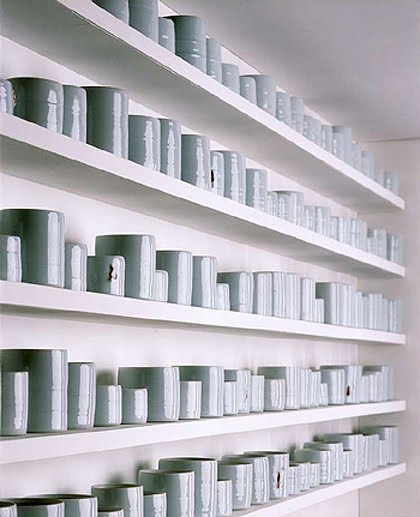 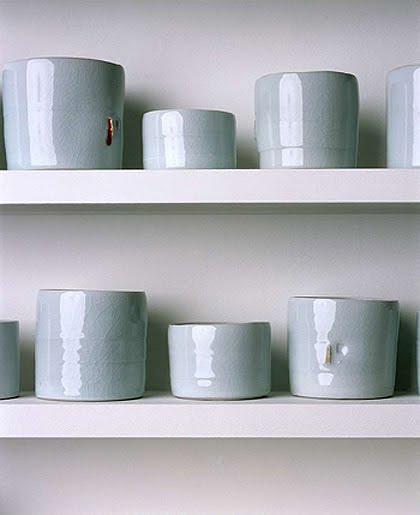 And then I came across a mention of another artist whose work I admire, the American sculptor Tara Donovan. Her handmade assemblages are often built from mundane materials like drinking straws, polystyrene cups, masking tape, toothpicks, or, as here, a million index cards. Again, through repetition and accumulation something happens that transcends the simple, single form.

They say it’s when you’re thinking about something it keeps appearing, and repetition has been repeating itself lately.

The creative potential of repetition is something I’ve been mulling over as I carry on drawing my own repetitive forms. 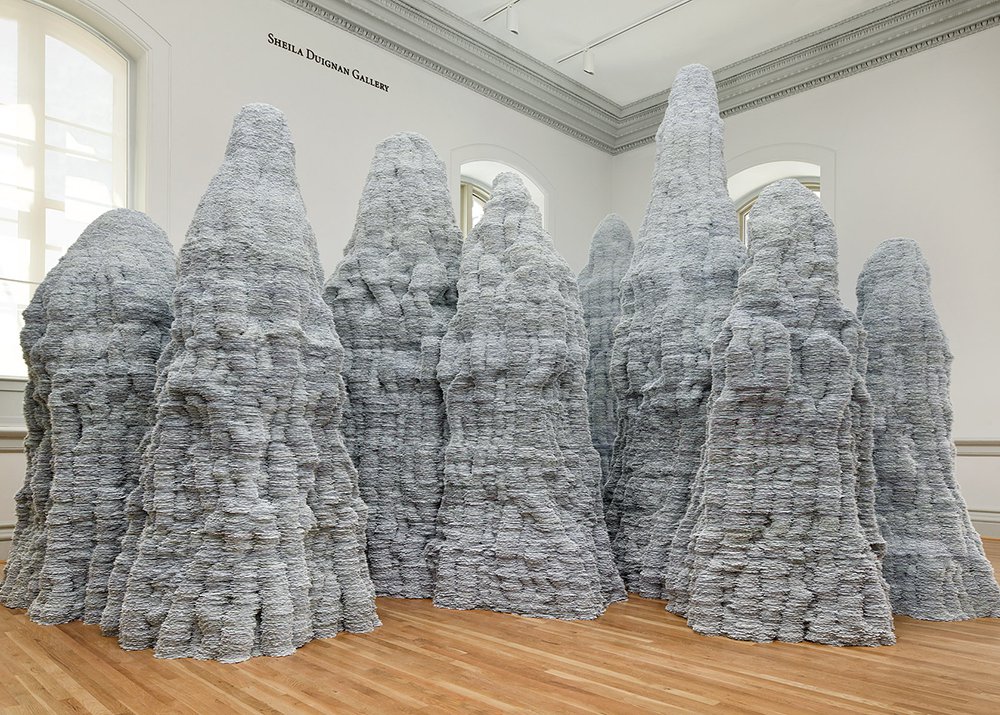 there’s no such thing as Repetition

If something is boring after two minutes, try it for four. If still boring, then eight. Then sixteen. Then thirty-two.

In an interview from 1985 he elaborates further:

Schönberg said that everything is repetition – even variation. On the other hand we can say that repetition doesn’t exist, that two leaves of the same plant are not repetitions of each other, but are unique. Or two bricks on the building across the streets are different. And when we examine them closely, we see that they are indeed different in some respect, if only in the respect how they receive light, because they are at different points in space. In other words, repetition really has to do with how we think. And we can’t think either that things are being repeated, or that they are not being repeated. If we think that things are being repeated, it is generally because we don’t pay attention to all of the details. But if we pay attention as though we were looking through a microscope to all of the details, we see that there is no such thing as repetition.

As the philosopher Henri Bergson has also said, boredom is really a sign of inattention. And that if we are really paying attention, nothing ever repeats in quite the same way, not least because we ourselves are different in every moment.

Way back in the last millennium I was an undergraduate student at Edinburgh College of Art. I studied in the Tapestry department, which, at the time, was a kind of free-for-all of conceptually driven art making. It was a bit of a refuge from the rather macho sculpture department at the time, and the big, and also quite blokey painting department. I started off making sound installations and bodging together constructions I had no idea how to make properly. Then, to my own surprise, I gravitated toward tapestry weaving.

This form of tapestry is woven by hand on upright warps, rather than on a flat loom. It’s a niche art form that’s recently been brought to greater prominence through the Cordis Prize and its association with the writer Ian Rankin. It’s really quite painterly, and the richness of colour you can achieve is unrivalled. Much to my parents’ surprise, I walked into a full time job doing exactly what I studied, as one of the team of weavers at the renowned Dovecot Studios. I was young and restless and still hungry to make my own work, so I left after a year to study in Belgrade [but that’s another story] But I think my time at the loom left its mark on me. 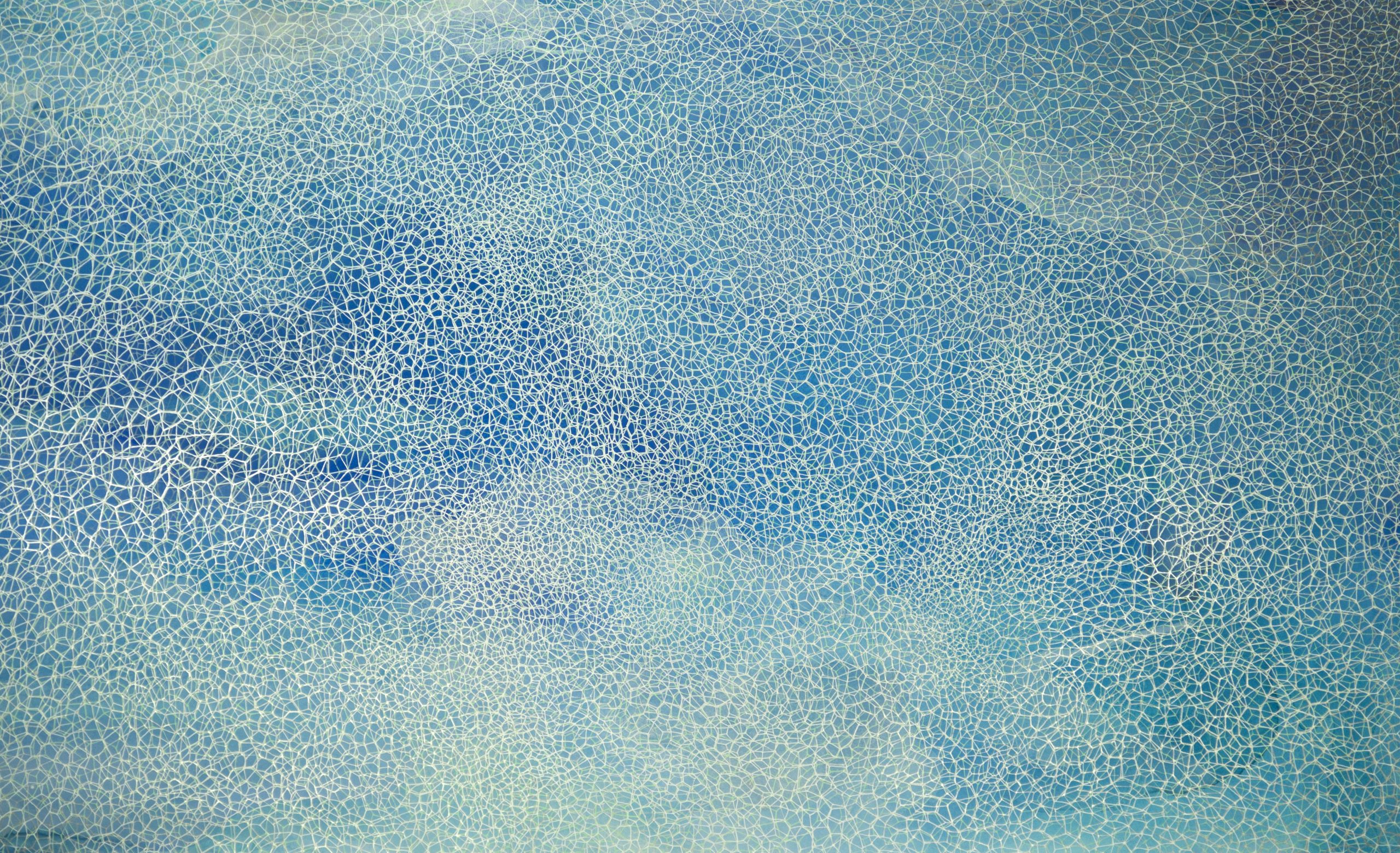 Samantha Clark, 2021, Sky Shimmer, 59 x 95 cm, Gesso, Gouache, pigment ink, silver ink on paper
The rhythm and repetition of tapestry weaving have come back to the heart of my creative practice after all these years. It’s fair to say that my way of making art is pretty repetitive. It’s slow and painstaking work, not unlike weaving a large tapestry. But there’s something steadying about the rhythm of a repetitive process, and the fact that you have a respite from making big creative decisions – each decision is small and incremental and often made more by feel and instinct. Once you’ve set off there’s not much you can do but just trust the process, keep going, and see how it turns out at the end.

As Prince said: ‘There’s joy in repetition’. [Repeat to fade]